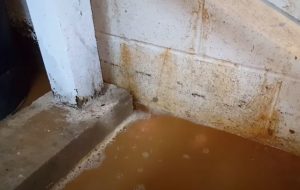 Homeowners faced with wet moldy basements and crawl spaces need a successful way to reroute the excess water away from the home’s foundation.  French drains are either built outside the home’s foundation or inside.  Most homeowners have no idea whether they need an interior or exterior French drain.  Call a Crawl Space waterproofing contractor like Hero Mold Company they’ll gladly explain which type will work best for your situation.

What is a French Drain? 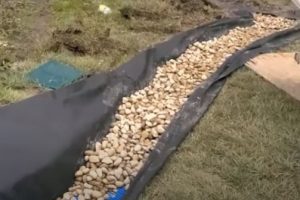 In 1859, Henry French a Farmer in Massachusetts built an underground drainage system to remove unwanted water in one area and relocate to another location that can safely absorb it.  The French Drain is a sloping trench holding a perforated drain pipe surrounded by gravel and all contained within landscape fabric that acts as a filter to prevent soil clogging the drain pipe.  The water is moved away by way of gravity directed to sunlight a safe distance away or sent to a cistern to be pump out with a sump pump and emptied a safe distance from the house.   These drains can be exterior (outside the home) or interior and which is best for your situation can be evaluated by expert crawl space contractors like Hero Mold Company.

Muddy low areas in your yard and bulging retaining wall are water problems mainly due to surface runoff can be remedied with an exterior French drain.  When homes are built on flat land, these drains are installed during the home’s construction because they have to be placed as deep as the footings to successfully catch the surface water.  This method is also called drain tile and the deep trench surrounds the home.  The water is directed from the trench to a cistern (well) in the crawl space or basement and pumped away from the home with an electrical sump pump.  However, when a slight slope can be maintained in the trench the drain system will extend a safe distance from the home to sunlight where the flow of water can be released.  Additional treatment of placing a Dehumidifier in the basement or Crawl Space would help get rid of residual humidity after a French Drain installment- go here for further information. 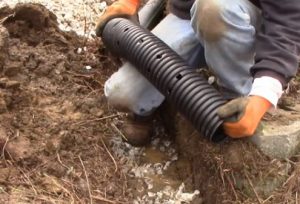 French Drains have been successfully used for more than 150 years and since then many improvements have been made to help them work longer free of trouble.  One of the biggest concerns with French Drains is soil or wondering plant roots Clogging the drain pipe.  This happens more often with Exterior French Drains because they lay under several feet of soil. Thus, several steps are taken to reduce that risk. 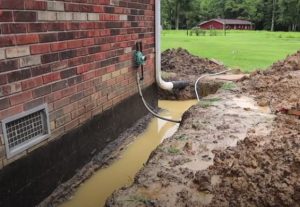 Successful protection against water flowing into your basement or crawl space is provided by both exterior or interior French Drains.  However, installing an Exterior French Drains around an existing home is considerably more difficult and costlier than when the home was built.  Usually, this is called a drain tile treatment around the home.  An Exterior French Drain built around an existing home, requires a trench excavated around the entire home’s perimeter down to the home’s footing, nearly 6 feet deep.  This will also likely damage whatever landscaping, driveway, sidewalk and deck are in the way.  Plus, servicing a clogged exterior French Drain always requires the destructive digging the drain pipe free to examine it. This may be nearly as costly as installing a new one.  Another issue, the excavated soil is usually piled temporarily in the yard and if it rains, you’ll be chasing mud all through the yard. 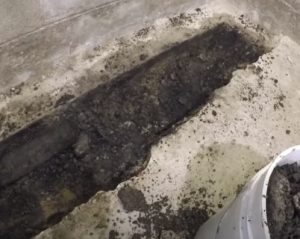 Interior French Drains are often the preferred less expensive way of coping with damp crawl spaces or basements.  They are an especially successful in the case of a high-water table that is pushing water up through the basement cement floor or the earthen ground of the crawl space.  Interior French Drains are less labor intensive than digging out a home’s foundation to install exterior drainage.  An interior French drain requires a trench about 1 foot wide by 1 foot deep dug around the perimeter walls inside the damp crawl space or basement.   In the basement, a jack hammer is used to break up the cement then the trench will be dug out by hand.

The interior French Drain trench maintains (when possible) a slight slope providing a gravitational pull for the water to flow into the catch basin outfitted with a sump pump to move the water to an acceptable location away from your home.  The perforated drain pipe is surrounded by gravel and a fabric filter to prevent clogging.  Maintenance of an interior French Drain is easy because the pipe is so accessible it can be uncovered and repaired quickly.  Also, happily this drainage pipe treatment is less likely to clog up because it’s not buried beneath several feet of soil.  Another positive, Interior French Drains are protected from the elements which enables them to be installed year-round.

Hero Mold Company will quickly answer any calls, emails, or texts. Give us an opportunity to prove we can fix the mold issues in your home at a fair budget value price.  Locations we Serve here